SO lately I have been putting the kids on their tummies and their arms draped over thier boppy's. I "thought" that since I had sat there many a time with them and not seen anyone move that if I went to the bathroom while they were laying there, that everyone would be in the exact same position when I came back. I wasn't gone that long (wasn't the long kind of bathroom break) and when I got back this is what I saw: 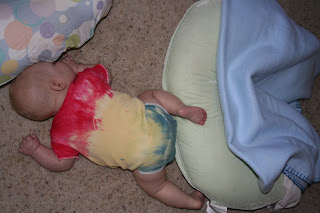 Ayva (and she had fallen asleep like that. :( Poor thing.)

So I thought "Ok, Ayva can crawl out of her boppy. I will just not leave Ayva alone like that. But the other two didn't crawl out so I can run and make some bottles. And I came back to this: 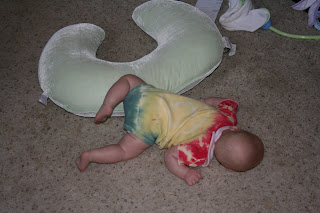 Anna. (She was still crawling out of it when I returned to the living room. Not crying or anything..just content to be moving I guess.)

BOTH GIRLS CAN CRAWL OUT OF THIER BOPPY'S!!

Geeze! Just when I thought it was safe to leave them on the floor doing tummy time on thier boppy's........ I guess it's just strictly girls on the floor now. LOL.
Today was Earth Day and the only cute thing I could find for them to wear was the girls in tie-dye and baby justin in this: 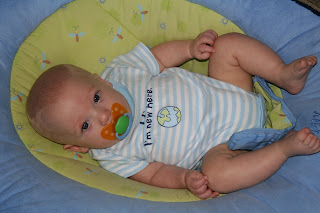 SO good news! We are moving! I am so excited! Now we live in a 2 bedroom duplex and it is SMALL! We will be moving into a real house! It has 3 bedrooms and 2 bathrooms! It also has a great big yard, and a really nice patio for the kids to play on! It is my grandma's old house and she is selling it to us for really cheap! PLUS she is letting us move in early, before we even get the loan on it so we can clean up this house to sell. Because I think no one would really want to buy this house the way it is. All the baby seats and car seats and swings and boppy's and play yards..... it's a bit crowded. And with three cribs in one room- with a dresser AND a changing table! Everything looks smaller with all that in it. It would be a good house for a couple with ONE kid. Not three. SO I'm sure it won't be hard to sell when we get most of the stuff out. We live like 2 minutes away from a major outdoor shopping center. That's gotta be good. Anyways I will post pics of the new house when I can. Right now I am going to sleep while I can!
Posted by Sarah at 9:57 PM

It's amazing when they choose to learn to do something!

Those pictures are so funny!
I remember we had something similar happen with Emma & Will- both of them flipped themselves out of their bouncy seats!
Congrats on the new house!!!